From it's conception, Perihelion Solar has aimed to support and give back to our community.  We are proud to announce that we are rolling out our cooperative initiative later this year. Learn more about the initiative and what it means for our customers in the article below.

Steve Gann, a former chemistry professor at Arkansas Tech University with a sideline as a master electrician, was an expert in electrical systems.

When they connected in Russellville more than five years ago, a spark flickered, and Perihelion Solar Inc. was born.

The solar energy developer is thriving in the figurative shadows of Arkansas Nuclear One, the Entergy power plant on Lake Dardanelle where Barrett spent nearly three years as a resident inspector for the Nuclear Regulatory Commission.

“The company was formed on perihelion day 2018, the day of the year the earth is closest to the sun, and Perihelion Solar has been operating out of Russellville ever since,” Barrett told Arkansas Business last week.

The solar development company has a dozen employees and a unique business plan: It’s an employee-owned cooperative that commits a third of its profits to its customers based on how much carbon dioxide their solar systems mitigate.

“We build solar arrays for residences and commercial businesses, and a third of our profits go back to them, divided based on the CO2 they mitigate,” Barrett said. “It’s pretty unique. And we’re pretty proud of it.”

Most customers are residential and in the Russellville area, where Perihelion naturally focused first. “So far, over four years, we’ve done quite well,” Barrett said. “But we have done larger projects. Our biggest was All Saints’ Episcopal Church in Russellville. But we do a lot of residential solar and have recently installed more battery systems, which are becoming more popular as generators go out of style.”

“We build solar arrays for residences and commercial businesses, and a third of our profits go back to them, divided based on the CO2 they mitigate,”

A 1997 graduate of Texas A&M University, Barrett said he grew up entranced by the subject of energy, “because it’s a solution to the world’s problems,” and he admits his “geek button” is easily pushed. “You just punched it, asking about nuclear and solar energy.”

Barrett was fascinated with nuclear and solar power even as a boy, “and now where we’re at with technology, with powerful solar panels having dropped so much in cost, solar really has become the cheapest source of energy available in the world.” Most people don’t realize it, he said, “because maybe they looked at solar years ago and it was so expensive you’d never get your money back. That has completely changed.”

Barrett had his eureka moment after a friend, former Russellville City Councilman Nathan George, manager of Joshua’s Fine Jewelry downtown, had a solar system installed at his home. “It’s a really friendly town, and we were talking about his array and how it had cost him such and such,” Barrett said. “So I asked him to give me the design and I ran it out, and I was like, ‘Man, I could have built it for half that price.’”

He knew there were other solar developers in Arkansas, but not in Russellville, located neatly about halfway between Little Rock and the state’s second- and third-largest cities, Fayetteville and Fort Smith.

“The only places to go were either northwest Arkansas or Little Rock, so we saw an opening.” Gann was already a good friend, “so we got together and started the company.”

Now that people are aware of Perihelion, “they’re learning about our model, and it has been very successful. They see that we’re more of a cooperative, rather than just like a general contractor for solar.”

We asked Barrett to bore down a bit on the business model. 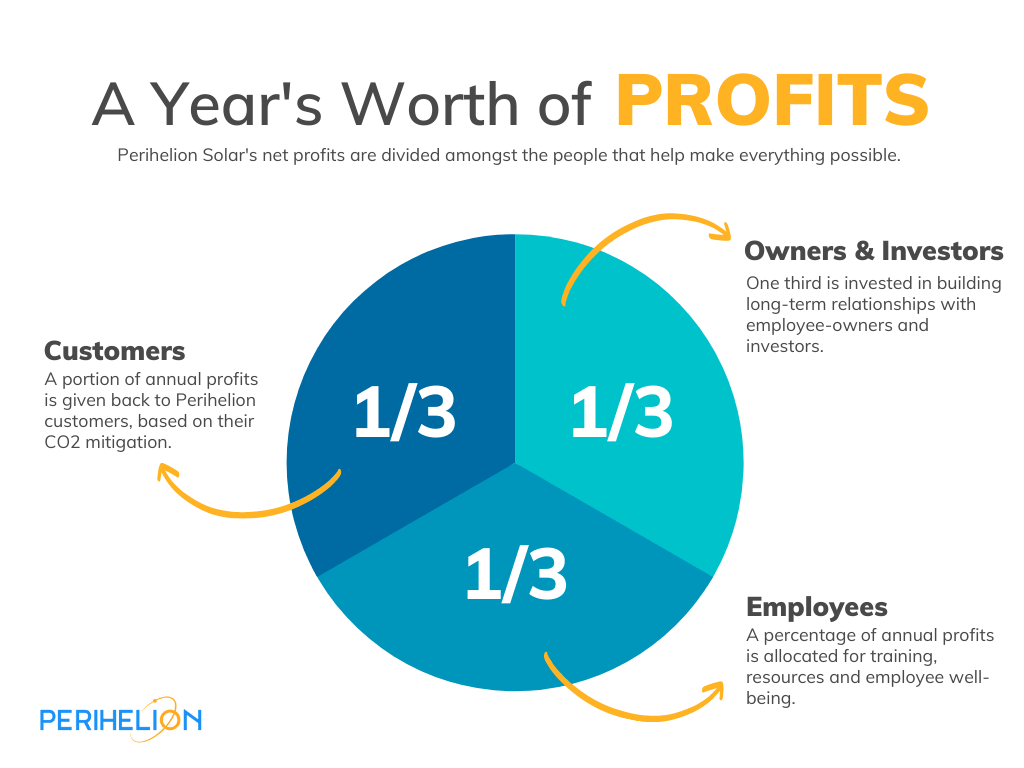 “Well, actually, this was our first profitable year, so it’s the first that we’ve made a payout,” he said, getting to the bottom line. “A third of our profits go to our shareholders, a third of the profits go to our customers, and a third goes to employees.

“We take the grid profile for each customer, what generation sources delivered utility power to those sites, and compute how much each system reduced CO2 emissions. Our software calculates that. And then we basically divvy up that one-third of profits and give it back to our customers based on that mitigation.”